Introducing Season of the Sword 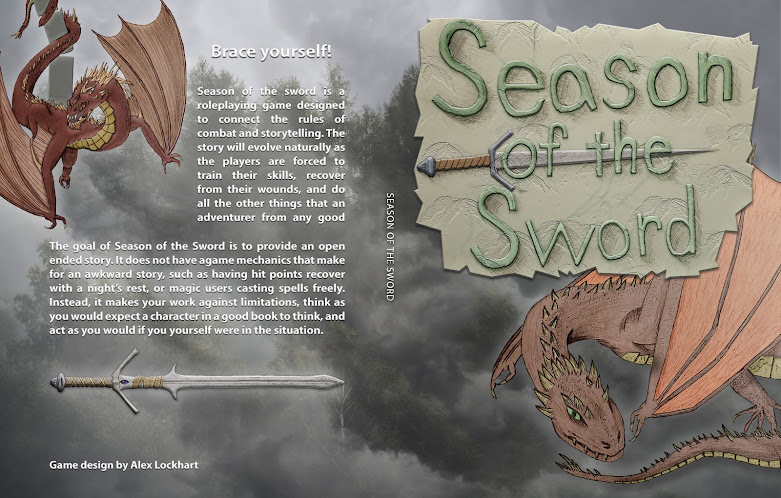 For my whole life I have been fascinated by table top games and their rules. Creating rules of my own has been an obsession of mine. I have discussed board game design before, however the rules of roleplaying games is also I have spent a lot of time thinking about.
I have almost two decades worth of notes on the types of rules and mechanics I would like to see in a roleplaying game. Dungeons and dragons was my first inspiration. Many years of 3rd edition and 4th edition led me to take notes on the things I would change, how I would do it better. Then, Hackmaster came along. It made me expand my ideas on what is possible with it's count up initiative system. More notes were added to my growing collection.
Last year, I poured through multiple decades worth of ideas and started refining a set of rules under the title, "Season of the Sword". Whatever the catalyst was, I don't know, but this year I have obsessed over seeing these rules to the finish line. Now, an initial "alpha version" is available on Amazon.
This is still a very early version and will require much refinement. However, it is a start. It has also driven my recent obsession with art, since I needed to spice up the rules a bit, as well as a "campaign manager" app, for the new campaign I am GMing with these rules. I'll talk about that more in another blog post. Also stay tuned for official character sheets for Season of the Sword.
P.S. The Cover is a work in progress!!!
Labels: Season of the Sword