Designing tabletop games is an intriguing mixture of skillsets. Interesting themes and well crafted rules require creativity, careful planning, persistence even math which can help balance complex mechanics. Often I will have a spark of imagination for a game design that I want to capture. Very often this means typing up a document and trying to describe my vision. However recently I have been doing quite a bit of drawing and thought I would combine the two, and encapsulate my idea for a game in a picture of the setup. Along with a quick summary of the rules I can come back later and recapture my spark of imagination. 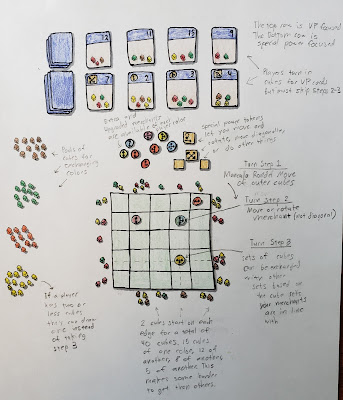 I called this one "Merchant Cube Mancala" because the cubes on the outside of the board are moved clockwise with "Mancala" moves. Then the merchants, represented by the circular tokens on the board, can exchange cubes based upon the sets that they are pointed to. Finally these cubes are turned in for the victory point cards at the top. Some of these victory point cards also give enhancements which help you collect and exchange goods quicker.

In this way I can always come back to this picture and recapture my ideas around this game, without having to interpret a dense, quickly written rules summary. 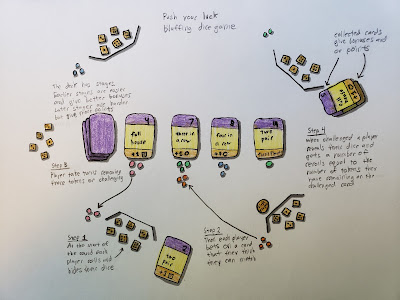 I call this one "Push your luck bluffing dice game" because you are essentially trying to get certain sets of numbers based upon the dice you rolled in similar fashion to Yahtzee, however here player's slowly take playing pieces away from the center until someone challenges another player. Then that player must reveal their dice and try to achieve the card they bet on with a number of re-rolls based upon the number of playing pieces left in the center.
Labels: Board Game Design tabletop