Out From The Deep: A D&D 5e Session Report 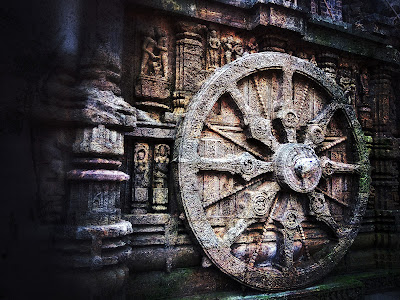 Asuryan inspected the iron dwarven door for some time in attempt to break the lock. All his attempt failed however as the other stood by looking on impatiently.

"We must search for the key or some other way in" explained Suthra. His half orc voice echoed throughout the mushroom filled cavern. They scaled the rocky walls in order to reach yet another passage that made it's way under the ancient dwarven city of Khundrukar. Asuryan was up first and then assisted the others with a rope. Last of all came Slighter. As he was being pulled up the cliff face the faint sound of a growl floated lightly along the thick subterranean air. The wolf was still on the prowl.

They searched deep into the caves. At length they came to yet another cavern with many passages leading out. Another growl could be heard, this time loud and clear. However it came from another source as it did not sound like the dire wolf that had been following them for some time now. A sturdy wooden gate blocked one of the passage ways. Behind this a bear paced back and forth. Their approach agitated the beast as it's growls rang loudly through the passages.

Suddenly another troupe of troglodytes appeared ambushing from multiple directions. Their fangs were were shown as they hissed, ready to have a bloody revenge. The caged bear now became even more agitated and began breaking it's way through the gate. Splinters flew through the air as Nim transformed into her own bear form and met it's attack head on. The troglodytes barreled down the passage. Slighter blocked the attack from one direction as Suthra defended the other. Empowered by the dwarven warhammer's own desire for revenge he made quick work of the first of the ambushing creatures.

Above the howls of the troglodytes and the clashing of the weapons rose the thunderous roar of the two bears. They rose to a great height above the elves and men as they then tumbled through the cage and into the cavern. Nim clenched the paw of the other bear in her jaw. With a twisting motion she drove the bear to the ground. It looked up in defeat as she threw her full bearish weight onto the base of it's neck. With a cracking sound it remained motionless upon the ground. The troglodytes now fled back down the passages after seeing the onslaught that was about to ensue upon them from the druid. She returned to her elven form and fell down in exhaustion.

After a great while they found themselves once again back into the hall of the dwarven tombs which lay next to the cliff overlooking the mushroom filled cavern.

"There is only one thing left to do" began Asuryan. "We must search these tombs for the key." Daring to open the most ornate of the tombs, a voice spoke inside his head. The will of the ancient dwarven kingdom challenged his own. The folk of Durgen sounded from the deep once again, if only in the mind of Asuryan. The temptation to defend the ancient dwarven tombs rose within him. The desire to fight back his own companions came upon him. At the brink of choice the challenge past. The songs and voices of the ancient people left his mind. The visions of their splendor past away from his sight revealing a tomb of glittering gold, finely crafted weapons, a crown, and a single key. These they distributed as they saw fit.

Suthra stood guard by the cliff passage that led down into the caverns below. A pounding step resounded from the dark. A monstrous lizard slithered its way up the steps. Suthra braced for the impact. Just before it reached him it pulled its neck up revealing it's true size, standing some 15 feet tall. Swooping it's head down, Suthra was swallowed by the beast. Slighter now charged forward in defense of his companion and dealt a great blow to the underbelly of the creature. Now burning moon light shone from above as Nim and Alaric assisted in the combat. With pain the creature made no retaliation. Suthra's hammer fought it's own way back up the lizard's throat at his command. With such an onslaught from within and without the battle was over as Suthra had to be cut out of the lizards belly.
Labels: Dungeons and Dragons roleplay session report sunless citadel tabletop