Let Them Keep It: A D&D 5e Session Report

Deeper the descended into Khundrukar. Passing beneath the smooth cut stone and into rough hewn caves. Water could be heard echoing through the passaged but was at first unseen. Finally the source subterranean water course passed across the cave passage. The water was like a jet out of one wall and then descended sharply into the dark depths that the torchlight could hardly penetrate. 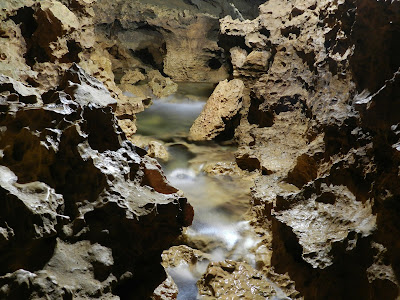 Asuryan was overcome with the desire to explore. Rather than staying to the ancient dwarven path that led onward he climbed into the water way. "Only to see beyond the bend" he told the others as he disappeared into the watery darkness. A rope was tied to his waste and Slighter held it tightly as he pinned himself against the rocky wall.

At first only the echoing splashes of his steps could be heard. Then all sound beside the cracking torch and the rushing water ended. Now a scream was let loose. Some great commotion was occurring down the tunnel. A great splash echoed up the tunnel. The rope shot forward and tightened. Slighter was yanked forward.

"Asuryan has gone limp by the looks of it!" Slighter announces as he strained with all his might to hold the rope. Now two troglodytes came out of the darkness. Half running and half swimming upstream they crashed into Suthra who stood guard by the entrance. He withstood their attacks long enough for Nim to let loose a blinding moon light. Engulfed in white flame they fell lifeless into the water.

All now heaved the rope upwards and Asuryan was breathless. With a few words from Courana he gasped as gurgling water flowed from his mouth. After having taken a few shallow breaths he uttered some hoarse words, "The troglodytes own the water way." He stopped to take another breath and then continued, "let them keep it."

Moving on from that place they came to a wide open area that contained the tombs of dwarves. Ancient carvings of the glorious days of Khundrukar were depicted with the names of long dead dwarven lords. The place stood upon the edge of a wide open underground space that opened up before them. A great number of mushrooms filled the area. Passaged opened in all directions leading on. A single iron door was placed on the far side of the room. Nim carefully led them onward so as to avoid any poisonous traps of the under dark.
Labels: Dungeons and Dragons roleplay session report sunless citadel tabletop