They continued their delving deeper into the citadel. The further it descended into the earth the more ancient it felt. Stone was replaced by gnarled roots. After some time they came to a long hall and passed through an old stone archway. The small room they entered into was lined in book cases and had a solitary desk in the middle of the room. Nim's eyes gleamed with the possibility as she scoured the books and scrolls, finding not a few that contained within them long held secrets of the deep earth. 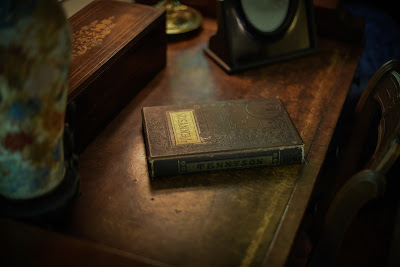 Slighter and Suthra gathered around as Nim opened an old dusty book as Asuryan stood in the long hallway keeping watch on the path behind them. Asuryan heard a boom come  from behind him as the wind from the blast drove torn shreds of paper out through the doorway. Turning to look into the room with his staff at the ready he saw Suthra gripping his chest and gasping to catch a breath. Slighter and Nim both laid unconscious on the floor. The table was burnt black and and all of their faces were blackened by the soot of the explosion. The book sat untouched, unstained, and open upon the table.

Rushing to Nim, Asuryan gave here a draught of a healing liquid that ran red. She picked her self up to her feat as the single closed door burst open with a group of goblins leaping in. Suthra and Asuryan met their charge as Nim crawled back to Slighter, raising him with an empowering strength by her druidic power.

A few of the goblins were cut down as Nim leapt forward, feeling new earthen power within her and formed herself into the shape of a bear, devouring the last goblin that had made the poor decision of attacking the group. The bear rampage continued into the tunnel that lay beyond the door which lead into a large cave like opening with many gnarled bushes and trees littering the area. Suthra followed along with Asuryan and Slighter as the rampaging bear met a horde of tree blights that leapt from the shadows of the trees. 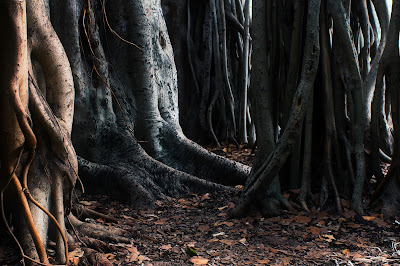 The tree blights were spindly and weak, but came forth in great numbers. Slighter charged forth ripping them to shreds with blow after blow. The battle amongst the trees against the blights continued as they drove the blights further into the underground forest. After some time Suthra called out to his companions to stop the advance, feeling that they were being pulled into some trap.

The blights disappeared from sight as they moved forward slowly, coming to old sections of crumbled stone walls. From behind the walls a large tree overshadowed the whole area. Its limbs eerily swayed back and forth in the still air. Stepping out from behind the wall Suthra and his companions saw two men and a woman standing around the tree. One man covered in vines and roots as clothing turned as the remaining tree blights gathered at his feet.

"Let us speak as friends without such violence." The man said from under his dark hood of leaves, "I cannot be blamed for what nature has done."

"And we cannot be blamed for defending ourselves" Suthra replied.

"Fair enough" the man said as he turned to the tree and looked up with his arms spread wide, "The stake that slew Belleck the Outcast was planted long ago in the depths under this ancient citadel. Sunless it was when planted, and sunless it remains. Small it was when planted, but small it no longer is. The goblins above have sold the fruit of this tree far and wide, and its seeds now are in every corner of the woods that lay around these lands."

The faces of the other man and woman now were apparent. Their skin was like bark and their eyes black. Their faces looked onward, cold and emotionless. "Join me and aid me" the man said as he extended his open hand towards Suthra. The cold deathly aura of the tree seemed to be creeping into his mind. He gripped his warhammer as the blights could be seen surround him from the depths of the underground forest. "If you won't join me, then feed my beloved tree with your blood!" The man's voice raised to a horrific scream as the blights attacked.

Asuryan and Slighter appeared from behind the wall to the horror and surprise of the root covered man, cutting down the ambushing tree blights with ease. Suthra charged the woman, the nearest of the three but was met with a blinding spray of light from her hands. He fell to the ground but was followed by Slighter who landed a great blow, ending her next spell with death.

Nim in bear form leapt from behind the wall as the armor clad man moved forward to defend the other, but was torn to pieces by the fury and onslaught of the bear. Surrounded, the man fought to the end but was at last slain in a bloody tandem of claw, sword, staff, and hammer. 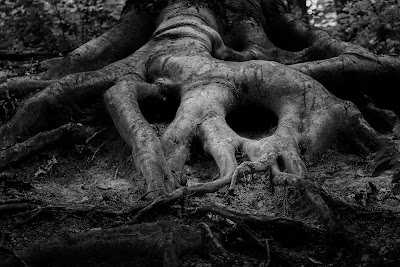 All was quiet in the depths under the sunken citadel. Searching the bodies of the nature possessed people they found great wealth, likely from the selling the fruits of the tree to the goblins above which had been legend in the surrounding villages and lands. They slowly made their way back through the citadel and snuck carefully past the kobold territory near to the entrance. After some time the came back to the lands outside, now late in the day.