The weeks passed slowly in the aftermath of the Sunless Citadel being ransacked. Nim, Asuryan, Suthra, and Slighter became momentary heroes in the life of the Old Board inn of Oakhurst. They told their stories to the excitement of the locals, who were in no need of adventure as they lived on the edge of the wild. However the stories of the Citadel did amuse them for a time.

Their fame quickly settled down as the stories were repeated and were replaced by rumors of movement in the wild. Suthra spent much of his time in the wild lands around Oakhurst along with the rangers in the woods, a group of volunteers devoted to keeping safe the lands around Oakhurst. This was a difficult and dangerous task, but they brought back tales of kobolds, ogres, and even some rumors of a winged dragon in the sky, as black as coal. This latter rumor was considered uncouth to repeat and few believed the tales.

Nim withdrew herself to her adopted family, a village of hobbits that sat a two day journey to the South of Oakhurst. They lived in a hilly region beyond the deep woods to the South, on the edge of even more wild and unknown lands. They had lived their for as long as anyone knew, for most of the less wild folk had just come to the region out of the Empire in the west, which was actively expanding its boarders. No one understood how they protected themselves, being small and seeming so innocent. They lived dirty grimy lives and the rare individual who had visited the village reported that it was like a rabbit nest, and so it acquired the nickname of the Rabbit Warren.

Nim had begun visiting Oakhurst when it was first founded, which was in the year 758 by the empire's counting of years, only six years prior to the current events. She was a young elf, who had come of age only a few decades back and was raised in one of the other outposts of the empire. She left her family and instead of taking over the family business she went into the wild and has lived with the hobbits of the warren ever since. Since the events of the Citadel she had taken on a young hobbit companion named Alaric who shared her wild magic powers, but to a much lesser degree.

More weeks passed and on a day in early November the cold winds began to blow with an extra bite. The four adventures of the citadel had gathered in Oakhurst. Mainly by chance were they all gathered in town at the same time. They were walking through an area of town dominated by thatched roofs, a fair distance down the road from the Old Boar. As they walked they spoke of their adventures together, and shared the various rumors they had heard of the surrounding wild lands. Suddenly, a panic broke out in the crowd ahead. A rush of villagers came down the road. The straw of the thatched roofs could be seen bursting upward beyond the roofs of the closer homes.

What could be causing such destruction they did not know, but they wasted no time in drawing their weapons. Suddenly, from around the bend, a lumbering giant was walking down the road. He carried no weapon, and his skull seemed crushed on one side. Blood fell forth from him as he had walked. Slighter charged, dealing a great blow to the giant with his sword. Suthra and Asuryan followed suit, while Nim, and her new companion Alaric remained back. Nim held forth her hand and a ray of moonlight poured forth, blinding the light of the sun that was still low in the sky that morning. The beam of light boiled the skin of the giant. In a roar of pain it kicked with its foot, sending Slighter some twenty yards back. He lay motionless on the ground as the battle with the giant continued.

After some time and much destruction to the village, Suthra dealt the final blow to the invader. It fell with a thud that shook the whole village. Slighter recovered quickly with the aid of Nim and Alaric while Asuryan left to inform Vurnor Hucrele, the current mayor of the town, of the disaster that just rent the village. Nim investigated the body closely before Slighter and the other village folk hauled the body away. She discovered the body was diseased, but not poisoned. This was to her relief, as the damage to the giants skull looked like the work of a huge claw, and the reports of black dragon grew fearfully in her mind.

"We can waste no more time" announced Suthra as Slighter returned from helping to haul the body away, and Asuryan returned from announcing the events to the mayor, "We must track this wounded beast back from where it came. We have not time to waste, I do not want the trail to grow cold."

They all agreed, and followed Suthra into the wilderness. They prepared for a long journey, not knowing how far they may have to travel. The trail of the giant seemed zagged but steadily went Northeast for the entire first day of their tracking. On the second day the path went further North, taking them East of the Sunless Citadel. On the third day it went west, leading them to the lands North of the Sunless Citadel. These lands not even Suthra or Nim had travelled in before, and the maps of the Empire showed no details in these parts. In these dangerous lands they feared a kobold ambush, or worse. They kept no fire and made their camps in the deepest thicket of woods that they could find. 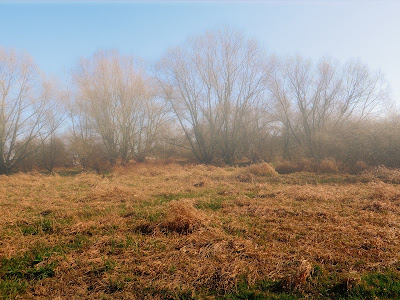 On the third morning of their journey tracking the giant Asuryan had the last watch. The lands in these parts were rough and filled with low lying brush and thickets, and spotted with patches of trees. One of these patches they had made camp in. Just as he was about to rouse the others a black spot in the sky drew his attention. He was looking Eastward, but the spot seemed to track Northward at first, but then suddenly turned eastward as it disappeared from his vision. Then drawing his vision closer he saw a company of armored orcs pass by crossing the path of the giant. They also passed to the Northeast. He thought that they seemed to be coming from the Citadel, but he was unsure.

He quietly roused his companions to discuss the events he just witnessed and to continue their journey. Suddenly deep growling voices filled the air and four bare chested orcs leapt from the woods. They wielded two handed axes and with a fury attacked the camp. Asuryan was dealt a grievous blow. Suthra and Slighter managed to avoid the axe swings. Slighter retaliated quickly, slaying the oncoming orc. Suthra wedged himself between the trees forcing the orcs to attack him first. Strike after strike came against him from the orcs but he avoided the blows. The orcs grabbed, clawed, bit, and kicked but Suthra withstood the onsalught long enough for Slighter and Asuryan to flank the ambushers and slay them.

Fearfully they withdrew themselves into the thicket to discuss their next move. They felt fearfully exposed in these Northern lands that seemed to be filled with orcs.
Labels: Dungeons and Dragons roleplay session report sunless citadel tabletop