The Discovery of Khundrukar: A D&D 5e Session Report

Many paths led before them. Did the orc troop truly come from the Sunless Citadel in the South? Should they track down the flying shadow that they saw fly to the North? How could they abandoned their journey along the giant's path that was taking them Westward? The discussed these various paths that led before them long into the morning. At a great length they chose to keep to the course on which they had begun and to follow the giant path westward.

The land that day quickly gave way from the shrub brush and tree spotted hills to barren and cracked plains. There was no more sign of orc on the ground or shadow in the sky that day. Night came and they felt fearfully exposed in that land, the Barren Lands they called it. Again they kept no fire for fear of being spotted by orcs, or worse things.

Morning came without trouble and they continued along the westward giant trail. The land descended all that day. The cracked ground gave way to wet ground. Grasses and bushes sprouted out of the rich soil. At times they had to make their way around a pool of water or a mud pit. In the far distance they saw a isolated rocky peak sticking out of the otherwise level land. Again night came. This time they took shelter in a deep soggy thicket. A fire was out of the question even if they had desired it. There was no dry fire fuel in sight.

The night brought with it noises of various sorts. A grunting it seemed at times. A pounding of the ground at other times. It went to and fro all about the western side of their camp. The thought of the sounds of the giant crept into their minds. After some time they gathered their supplies and Suthra led them northward away from the sounds. When the sounds had faded in the distance and then had ended altogether he led them West in a hopeful attempt to meet back up with the giant trail the following morning. Day came and as expected Suthra was able to avoid the source of sounds in the night and picked the trail back up a mile or two West of their previous nights camp.

The rocky outcropping that they had seen in the distance was now much closer. Two rock outcroppings could be seen along with a lake that lay East of them. The lesser of the outcroppings was to the Southern edge of the greater one. Smoke rose from this smaller and closer outcroppings. The giants trail led them directly towards it all of that day. Orc tracks now covered the various paths that criss crossed the giants trail in the pine woods that sprang up in the region around the base of the rocky peaks. Into the late afternoon the giants trail disappeared onto a rock area that covered the top of the peak. Smoke could now be seen rising from a point not far away.

Asuryan crept towards it and noticed that it smelled of the smoke of a campfire of some sorts. The smells of cooked food rose out of the hole in the rocks. After discussing their options they decided to investigate. Asuryan climbed down the rocky crevice which formed something of a nature chimney. He lowered himself into a cave. It appeared that he was standing in something of a makeshift kitchen. Listening carefully he heard human voices down the hall and climbed back up the crevice. They decided to investigate further and lowered each other down by rope. 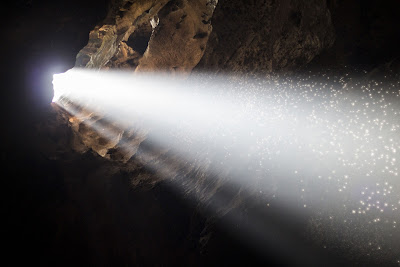 They discovered clear orc signs all about the cave along with piled crates and barrels as if the orcs had stockpiled various supplies. The cave gave way to smooth dwarvish halls in parts, and then ave way to caves again. At length the source of the human voices were found, captives of the orcs. After freeing them from their chains Slighter asked many questions. The captives explained how they had been sent by the Hucrele family to establish a small farming settlement to the West of Oakhurst. About a month ago, before they had even finished building the first structure of the new settlement they were raided by orcs and were captured. Slighter then asked about the rumored dwarven city of Khundrukar. The captives explained that they were in it.

Searching for further sign of orcs within the dark underground passage they came to a small passage that led deep along it's own course. Opening the stone door on the other side a group of three orcs filled a small room. One of the orcs was busy at a table concocting some devilish mixture. Slighter charged the seated orc dealing a grievous blow to it, but another orc returned the attack. It's great axe deflected off of Slighter's armor, sending him reeling onto his back.

Down the passage another orc appeared on the other side of the group, trapping them in the passage. Slighter crawled back into the middle of the group for safety while Suthra and Asuryan fended off the main group of orcs. One of the orcs launched a bottle into the passage which exploded in flame. Slighter clothes were caught ablaze. As Nim fended off the orc that had trapped them in the passage on one side, and Suthra and Asuryan fended of orcs on the other side, Alaric crept over to Slighter to mend his wounds. The halflings nature magic was released amid the chaotic battle. After a bloody fight their orcish foes were dispatched.

They continued down the passages and told the captives to remain by the first room down which they had descended and that they would return to lead them out of the dungeon. Opening yet another stone door they came to a large chasm that separated them from what appeared to be an ancient underground dwarvish city on the other side. A single rope bridge, of orcish make, spanned the chasm. Orcs stood on either side and a mighty battle ensued. Orcs charged across the chasm and were hewn down. Suthra, Asuryan and Slighter themselves charged back across the chasm ducking under the arrows of the enemy. Nim and Alaric unleashed powerful moon magic, blazing in bright streaks across the dark depths of the chasm.

The battle raged on seemingly without end as the orc after orc piled into the fray. They slew the last of the orcs that were within sight, but the deep booming drums could be heard echoing all about. They fearfully fled back the way they came and were caught by another group of orcs led by a half ogre that wielded two great axes. The drums continued to pound all about as more orcs surrounded them from various passages. In desperation Nim transformed herself into her bear form and charged the half ogre.

The battle seemed unending as it raged on in the depths of Khundrukar.
Labels: Dungeons and Dragons roleplay session report sunless citadel tabletop