Ambush in the Rain: A D&D 5e Session Report 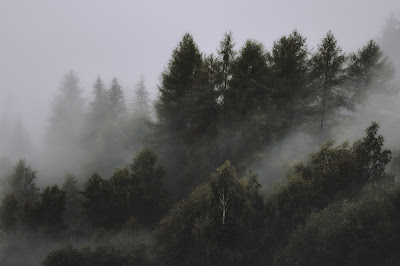 The day wore on quickly as storm clouds gathered overhead. The rain was followed by lightning, both pushed ever towards them by gushes of wind that swept the ancient road. Suddenly upon the road ahead, a lone figure could be seen. Obscured by the heavy rain, Suthra squinted as the water dripped past his eyes. Wiping his face to take a closer look, he could now see an entire row of spear and shield clad kobolds standing in a formation ahead of them. With a crack of lightning an ogre stood tall and massive behind the kobolds. The howl of wolves could be heard.

"Prepare yourselves!" Suthra cried out as he drew his warhammer. A rain of arrows shot out of the tree's at either side. Suthra ducked his head as he charged forward and yelled, "Keep a close formation!"

The words went on deaf ears it would seem as the chaos ensued. Massive wolves leapt out of the woods and met Suthra and Slighter's charge head on. Nim was caught by a horde of kobolds before she defend herself and disappeared under the mob. Asuryan came in and out of sight as the lightning flashed as staff, fist and foot slew a great number of the ambushing kobolds.

At the front of the battle Suthra and Slighter impacted the row of kobolds, slaying many upon the road. With a great heave Slighter gave the great wolf a gash that would have slain three men together, and yet the wolf fought on, tearing and rending at Slighter's arms. With whirling swings of his hammer, Suthra slew the kobolds as they came.

Nim was no where to be seen, slain, or taken captive, they did not know. Suddenly the mass of kobolds that had attacked from the rear were thrown back by an unseen force. The growing form of a bear appeared from where they had been, Nim grew in her bear form, more massive than ever before, and fell the kobolds that surrounded her. Another great wolf leapt upon her. The bear and wolf fought tooth and claw in a bloody match.

The lightning crashed and streaked across the night sky, revealing the silhouetted figure of the ogre standing before Suthra. It's club crashed into him with great force expelling them back. As Suthra and the ogre dueled upon the road, Asuryan, Slighter, and Nim slew the rest of the kobolds. After a great and bloody battle the ogre stood alone. However even it could not withstand hammer, sword, staff, and claw. It fell dead upon the battle ground. With a flash Asuryan disappeared from sight.

"Where is he going" cried out Slighter.

"He spied a kobold that fled into the woods. It was covered in a cloak and did not carry a spear like the others, but rather carried a wand." Suthra explained.

They waited for Asuryan's return for an hour before they grew worried, but at length he did return. Wounded he was as he approached out of the dark woods. The rain and storm had quieted.

"The mage fled into a swamp, about an hour walk from here." Asuryan explained. "A snake creature attacked me as I crept upon the mage. It had the body of a snake that is, but the arms and head like a man."

It was now deep into the night. They fled the battle scene and made camp deep in a grove of woods. They made no fire that night for fear of a second ambush. A second ambush did not come however, and the following day they returned to the village of Oakhurst.

Asuryan led Slighter to the house of the black scorpions, Asuryan's order of monks, of which Slighter was an indentured servant. Suthra and Nim retired to the Inn.

At the house of the black scorpions Asuryan greeted the master of the house, Dray'con he was named. At great length Asuyran told the whole tail of the Sunless Citadel, and the candor made Slighter grow nervous. He even told of the two signet rings of the family of Hurcele upon which a great prize was laid for their return. They had recovered them off the slain bodies of the tree posses people in the depths of the Sunless Citadel. Asuryan command Slighter to give one of the rings to Dray'con. He hesitated, and then yielded. When the opportunity arose he left that house, and returned to Suthra and Nim. Feeling the guilt of giving away their hard won treasure, he offered up the second ring to be the prize of Suthra and Nim alone. The thought of buying his own freedom from the black scorpions grew in his mind.
Labels: Dungeons and Dragons roleplay session report sunless citadel tabletop