The Descent of Vines: A D&D 5e Session Report

They had descended the hole some fifty feet. The vines crawled down the sides of the whole all the way to the floor of the dungeon that lay beneath them. From this lower room the vines extended out from the ceiling to the floor forming an earthen wall. Asuryan peeled apart the vines to look into the outer room. Stepping out of the vine enclosure, he motioned for the others to follow. 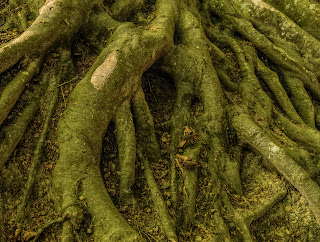 The room was covered in piles of dirt filled with small saplings. A purple glow came from the moss of the walls and floor. The light was dim as they walked into the darkness of this deep and sunken dungeon. The eerie creaking of a wheel could be heard. Looking up Asuryan saw two skeletal figures, one of which was hauling a wheelbarrow, the other holding a shovel.

With a mechanical reaction the skeletons screamed and hurled themselves at Asuryan. Suthra and Slighter charged forward to his defense. Together they fought these dark dead terrors in the depths of the earth. Their weapons clashed against the bone, finally shattering apart the exposed ligaments, undoing the dark magic that animated them.

Continuing on, the mud covered stone hall gave way to a mossy cave, clearly having been hewn out of the side of the ancient hall. A bugbear, hulking and muscled, leapt out from the cave. Slighter charged forward, driving his sword into the creature as it too landed a blow with it's mace upon Slighter's side. The force of the blow ripped Slighter away from his sword and to the ground, leaving his sword hanging out of the bugbear. The skewered creature fought furiously onward, but was cut down by the deft combat of Suthra and Asuryan.

As the cave was explored, Nim used her woodland magic to heal the black bruise that lay on Slighter. With renewed strength they pressed onward, not into the cave, but through one of the stone doors that exited the hall they had descended into. Asuryan snuck in quietly, and motioned for an ambush upon a group of sleeping goblin's. With a rush of violence Asuryan, Suthra, and Slighter came upon the goblins. Their aggression left them exposed however, as during their slaughter an even larger group of goblins came upon them from behind, trapping them in the goblin sleeping quarters.

Nim remained unseen. The goblins crowded around the entrance of the sleeping quarters in order to slay the invaders. Seeing them gathered together, Nim raised her hand. A silver light like the moon shot fourth. The room was lit with a searing white light that boiled the skin of the evil creatures. They howled in pain as the mass of goblins fell writhing to the floor.

They explored the now emptied home of the goblins. Ransacking through the kitchen's, sleeping quarters, and the armory of the dungeon dwellers. They were come upon the goblin wealth, along with various devices of disease and infection that goblin's are known to use on their enemies.

They continued deeper into this lower dungeon and came to a long room. Having been prepared and alerted to their presence, another bugbear, even bigger and stronger than the last hurled itself toward Asuryan. Together with Suthra they battled the beast. Nim ran at the creature, her form became hunched over as she jumped. She landed as a wolf. Biting with a fury at the knees of the beast it lost balanced. Asuryan's staff connected with it's jaw, being unable to deflect the blow for a lack of balance. 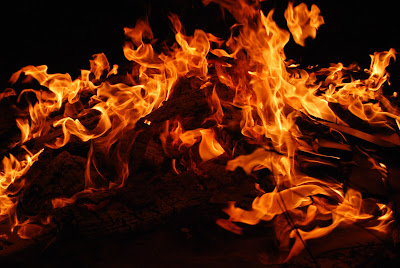 Suthra looked up from the dead bugbear to see Slighter engaged with a snake of fire. It curled itself like a snake, but issued forth the heat of an oven. Wounded and limping, Slighter fell back through the door from which they had come. The heat of the creature pushed the wolf and Asuryan back. Finally even the half orc Suthra could not bear the pain of the oncoming creature.
Labels: Dungeons and Dragons roleplay session report sunless citadel tabletop