My Experience with Heartburn

For nearly 6 years now I have dealt with fairly severe heartburn and have noticed that my symptoms and apparent triggers did not seem to match up with the common advice. I would like to describe my own experience with treating and preventing heartburn in case it may help others narrow down on their own triggers. Now saying that heartburn is sever is relative of course. Some might hear the descriptions of my symptoms and call it mild. Others may hear the same thing and be wide eyed. Therefor, allow me to elaborate. 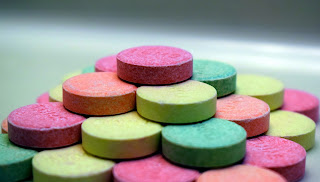 My symptoms began with burping, as odd as that may seem. Now this was not normal burping, but constant burping all day. This may not sound that bad, but if you burp every five to ten seconds for hours on end, it becomes begins to be very annoying. After a few hours it becomes down right frustrating. Over time my symptoms developed into a burning sensation low in my chest that would on occasion rise higher up into my throat. At times this burning was very painful, especially at night when I laid my head back. After months of this I saw doctors and had various treatments prescribed. Essentially, it came down to lifestyle and eating habit changes.

The advice from the specialist was to eat smaller meals, eat slower, and avoid greasy foods. Not eating greasy foods did not seem to have much of a change, but certainly my symptoms seemed to be sparked by eating large meals and eating too quickly. However those habits only seemed to exaggerate existing symptoms, but did not seem to be the root cause.

After years of being watchful about what foods caused the symptoms, there are some things I can say for certain. Mixed nuts, peanut butter and milk are the big three. Excessive water at one time also seems to trigger the burping but not the burning. Greasy, fatty meats seemed to be totally unrelated to my heartburn symptoms, and now that I have identified the major triggers, even large meals no longer seem to be problematic.

This is especially pertinent because I have recently been doing a one meal a day Keto diet where I eat a single large, fatty meal. The conventional wisdom would say that this would be the ultimate heart burn trigger, but for me it simply is not. I do have some burping after the meal but it is not excessive. In fact, after a few hours after the meal I feel great from a digestive perspective; much better than I would if I had eaten the same food spaced throughout the day.

Hopefully this helps someone else with their own heartburn symptoms. My advice is to simplify your diet so that you can identify which foods have which effects, and hone in on the foods that cause you problems. Be creative and think outside of the box, because when it comes to digestion and heartburn I think the conventional wisdom is often overly simplistic.
Labels: health