Fire from Below: A D&D 5e Session Report

They retreated to a deep place in the dungeons of the citadel in order to find rest. The fiery slashed of the flame creature rent deep into the armor of Slighter, and the icy slashes of the undead seemed to now cause a deep ache in their bones despite their armor having deflected the blows. After some time, hours or even a day they could not tell in those sunless depths of the earth, they continued their exploration. Treasure they were told they would find, and they had yet some of their own bravery to uncover. 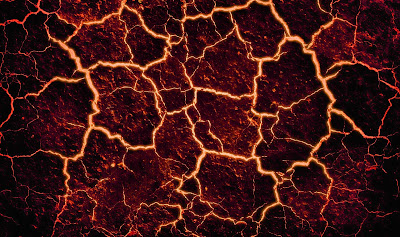 The dungeons of the ancient citadel were now torn, shifted, and cracked as the ancient stone structure now slide ever deeper into the earth, inch by inch, year by year. In some areas of the citadel holes with rising heat peppered the ground. Looking down one as they passed Slighter thought the size of the hole was eerily familiar to him. Suddenly the heat swelled like an oven and a worm of fire slithered upward and exploded in flame about him, blasting him back. It's scaly skin had glowing cracks that slid up out of the hole as it opened its fire fanged teeth to attack.

Suthra turned landed his warhammer upon the side of the creature and there was an explosion of fire that forced him to turn back. In similar fashion the others followed suit, Nim leapt into the air and descended to the ground in the form of a bear. She smothered the worm creature to the ground overpowering it and withstanding the heat of the creature as it disintegrated from her violent storm of claw and tooth. 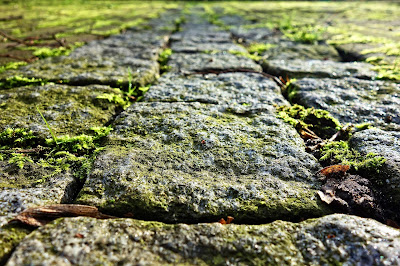 As they explored the subterranean complex they found many ancient statues, centerpieces of some ancient temple worship. A goblin could be heard here and there as they crept along and they slew a few that had been ill informed enough to attack the group. Many rooms were covered in new dirt and were the home of some unholy garden, watched and guarded with the lidless eyes of the undead. As they made their way deeper the gardens grew thicker and their skeletal denizens fought back ever more ferociously, but could do little to stop the attack of fist, hammer, claw, and sword.

At length they came to a well kept statue with a plate before it with words of some ancient chant inscribed. As Asuryan knelt before it he felt his strength sapped from him and he fell to his knees. Suthra, standing behind him, saw a shadow pass over. Asuryan looked frail and aged as he fell to the ground. The shadow grew thick in the air and took the form of a cloaked figure. The figure stood over Asuryan seeming to pull the life out of him. Suthra and Slighter charged. Warhammer and sword passed through the creature harmlessly. Nim followed, transforming out of her bear shape and casting an array of spells that shot the black shadow back. The shadow exploded as it hit the ground, and it seemed to seep into the cracks of the ancient stone floor.

In his weakness Asuryan spoke the words inscribed on the floor and regained strength. What sort of ancient blessing he had now received he did not know. In time he would come to learn that his skin was now resistant to the touch of fire.

The explored ever deeper and came to a winding tunnel that went down into the depths of the earth. After a long march down they grew nervous and heard the sliming, slithering, flapping sound of some unwholesome creature making it's way up the tunnel. An uneasy feeling swelled within them, and they returned to the relative safety of the citadel, not wishing to disturb such a gruesome beast from below.
Labels: Dungeons and Dragons roleplay session report sunless citadel tabletop