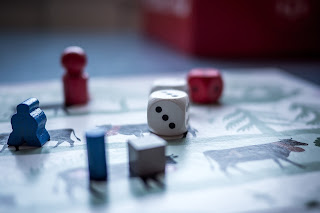 View the Living Version of this Document

The purpose of this document is to provide structure to the organization and management of the tabletop game design process. It defines terminology that can be used in accurately discussing game design. Additionally it defines a structured method for how a concept turns into a prototype, and how a prototype turns into a publishable game. The goal is to be technical and accurate and yet unopinionated about how a designer moves incrementally to a final product.

Game: A game is a list of versions. Very often the word “game” can refer to a specific version. This is the case in the normative usage of the word and also in this document.
Version: A version is defined by the “Rulebook” and the “Definition”.
Rulebook: Conveys the theme of the game and is the source of truth for the mechanics of the game.
Components: The individual units that can be manipulated in the game. This usually means physical pieces, but could include less substantive things such as a timer, phone app, etc…
Mechanics: The rules that limit and govern when and how the components of the game can be manipulated.
End of Game Conditions: The state of the components that ends the game with 0, 1, multiple or all the players being declared the winner.
Victory Conditions: A subset of the End of Game conditions where at least 1 player is declared the winner.
Theme: The theme is the real world nouns and verbs that are represented by the mechanics. Some games may not have a theme.
Craft: Anything the players see that is a result of the game. This includes the components, the shape of the components, the pictures on the components, the box, the rulebook etc…
Design: The design is a subset of craft. Design conveys the relation between the mechanics and the theme.
Experience: The emotional response that the players have to the craft, design and mechanics.
Component Item: An individual component or piece in the game. For example a single “gold coin” piece is a component item.
Component Type: A collection of component items that are all identical to one another. For example the collection of all of the gold pieces is a component type.
Component Category: A group of component types that all are printed in the same way (card, token, dice, etc…). For example the group of gold, silver and bronze coins is a component category.
Game Design Management: The practical methods and tools used to iteratively create versions of a game. The organization of a game and it’s versions. The way in which a game and it’s versions are expressed.
Game Design Process: The set of phases that take a game from being a concept to a publishable game.

This document is meant to define at a theoretical level what game design is as well as what a game itself is. Additionally it is meant to provide a practical method of structuring and defining a game as well as the process of game design and the different phases that it goes through. This document purposely does not discuss how one version of a game moves into the next version of the game. This is intentionally left to the individual game designer to fill by his game design expertise. In this way many game designers could ascribe to the game design theory and practice articulated in this document, while at the same time expressing their own creative talents and expertise.

I want you help and contribute! With your help we can arrive at a thorough theory and practice of game design that can be clearly articulated and understood. The goal is for this document to be ambiguous as to the specific tools used, as well as to the specific methods of incrementally, version by version, improving upon a game. In this way the theory, management, and process of tabletop game design can be understood without at the same time limiting the methodology of game designers.

If you have any contributions, suggestions, questions, qualms or disagreements, email me at alexlockhart7@gmail.com with the subject “Tabletop Game Design Theory”.

View the Living version of this Document.
Labels: Board Game Design games tabletop