Da'man, looking at the slain, realizes who they are. He slowly backs out of the room, not wanting to further incite hostilities with the barbarian tribesmen, "We came for a lockbox, a lockbox!". 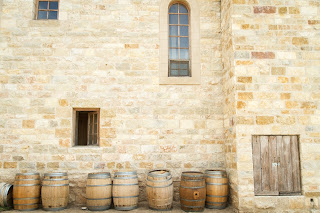 Glenn and Jim exchange self-confident smirks, watching him leave. Looking around they decide to take the south door and continue their search for Ogmand. The passageway behind the door leads to what is evidently a storage room. Many barrels cover another door to the left, with more barrels stacked up on the other walls of the room.

They knock over a few barrels, hoping to find something good stored up (they did find dried meats, if dried meet stored in old barrels in a wet and abandoned mine is your thing). More notably they found enormous, terrifying, gargantuan, evil... rats!

Actually they were just rats. No like normal rats. Like just rat-like rats. You know the ones that scurry away unless cornered? Yeah those.

Jim, confident that his barbarian slaying skills will translate to pest control, swings his axe. Missing it's mark, the axes lodges itself in a barrel. Glenn thrusts his sword with all his vigor, mid swing realizes a slash might be more apt against the rat.

The not-so-enormous but suddenly terrifying rats jump, biting and clawing up the leg, back and neck of Glenn. Jim frantically attempts to pull the axe out barrel as he is nipped in all manner of areas by the rats.

The frenzy continues, Jim falling backward as his axes comes loose from the barrel, flying out of his hand over Glenn's head... Glenn jumping up to run, tripping over Jim as he turns towards the door. As he falls to the ground, the short sword accidentally yet fortunately severs the rat in a guillotine-like fashion.

Emboldened and finally re-armed, Glenn and Jim reengage the rats, finding a home for the sharp ends of their weapons after not a few missed marks.

With the rats deciding not to continue the fight, and with less confidence than before, the two adventurers push the remaining barrels out of the way, happening upon a stash of crossbows. Large and heavy, with plenty of ammunition, the crossbows bring new vigor to the meager duo. Quietly walking in the dark of the underground paths they approach a red glow. Blinded by the brightness of the torches, they allow their eyes to adjust.


Shots in the dark

Looking on they see a room full of tables, half eaten food and half empty jugs. A man and a women sit eating, both obviously also from the barbarian tribes. With a glance and nod of understanding, Glenn and Jim quietly swing their crossbows around and begin loading.

Jim's crossbow miss fires, the bolt ricochets off the stone floor, bouncing and twirling, the dull end smacks Glenn in the back. Glenn hits the trigger of his crossbow in the excitement, but his bolt quite accidentally finds it's home in the back of the closest barbarian. The women shouts in anguish as she see's the man fall to the floor. Pulling out two daggers and glaring intensely down the hall, she runs towards Glenn. Both Glenn and Jim have time to arm themselves and both sword and axe are swung too soon as the approaching barbarian pauses to allow the weapons to pass by. Each of her daggers find a warm home in Glenn and Jim. Not pausing to allow for a rat-repeat, Jim uses the axe handle to choke the barbarian, and Glenn brings the battle to a short end.

Wounded and weary.
Bloody and faint.

They continue their search.

Shuffling their feet, dragging their weapons they open a series of doors along a long hall way. Opening one final door, the gaping jaws of an enormous worm-like creature lashes towards them, releasing its sucking grip on the juicy body beneath.

Terrified and exhausted, they bolt out of the mine.

"Who cares about a lockbox anyway?"