A few months back I hit up some friends of mine to try to wrangle them into playing some Hackmaster. I had recently looked into using the online roleplaying tool called roll20 and it seemed like a good fit for us. We had done a lot of 4e Dungeons and Dragons back in high school, but now most of us are in our mid 20s and either have busy lives (wife, kid, church, work for me) and / or have moved out of our hometown. In any event we did end up getting to try out Hackmaster on roll20... and so, here is the tale of Glenn, Jim, and Da'man...

The sun was gleaming outside, but Glenn, Jim and Da'man were in the dark of the inn. These three met for the first time on this summer day in this dark smokey inn. A tall and bulky middle aged woman approached and began to recall the recent events of her and her husband, who is the local butcher. She said an old friend came to their shop and was acting very rude... "All of a sudden", she continues, "he pushes my husband over the counter, grabs my dear lock box, and bolts." She explains further that she wants her lock box back and this old no-longer-friend shaken up. She says that in his hurry to leave he dropped a map with the hills up north circled on it. 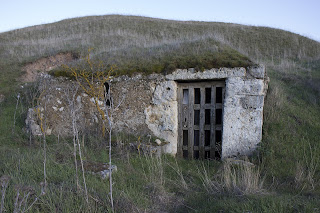 Jim knew the area, having explored the mines in that area in his youth, and knew of an old system of old mines that Ogmand may have run off to.

They take the half day to walk to the area and quickly find a recently used mine entrance. Da'man ever so politely knocks on the newly installed wood door. A slight glimmer of light shakes and bounces from under the door before it opens, and a strong wooly face peaks around the cracked door, "What are you doing here?"

Da'man casually responds, "Looking for good ol' Ogmand, is he around?"

"You should go!" The hairy-faced man replies.

Jim took advantage of the opportunity, "Ahhhh so he is hear I see, well let's have a look."

With a sudden change of attitude hairy-face allows them to enter, opening the door he leads them across the room.

The three jaunt across the room with high chins and puffed chests. The door slams closed behind them where a second wooly faced jumps toward them, spear pointed. A yip comes from not only one of the three in-over-their-head inn-rats. The spearpoint glances off of Glenn's shoulder who responds with an ill fated short sword thrust, impaired by his attempt to draw the weapon.

Jim's axe cleaves hairy-face from neck to arm pit, squealing in shock at what he just did almost as much as hair-face screeches in pain. The warm blood still leaking all over the floor, another short sword thrust misses its mark. Da'man finds a home for his sword, but only nearly penetrates the rough hide clothing of the wooly spear jumper. A series of exchanges are ended with another slow but deadly swing of Jim's axe.

Bloody and tired
Terrified yet exhilarated.